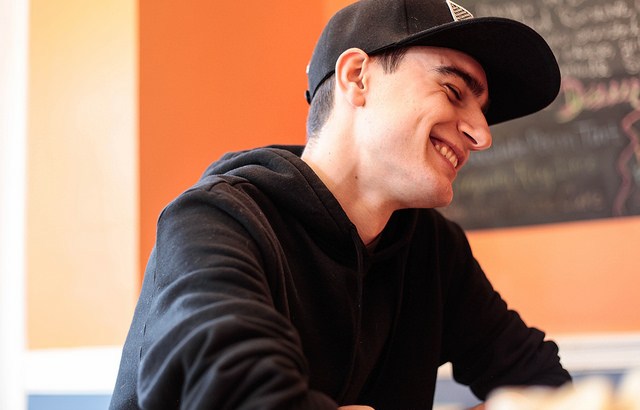 If you don’t know Oddkidout yet, you will soon enough. This young, inspiring multi-instrumentalist and producer, still in his sophomore year at Drexel, has already seen more success in the past few months than most artists hope to see in a lifetime. His self-produced debut EP, Within, was downloaded over 500,000 times within three days of its release and over the past year, he’s amassed over 63,000 followers on Instagram . When asked about where he wanted to do his Bands & Bites interview,  Oddkidout chose Sabrina’s Cafe in West Philly. There we chatted about Drake, Challah French Toast, Social Media, and more. 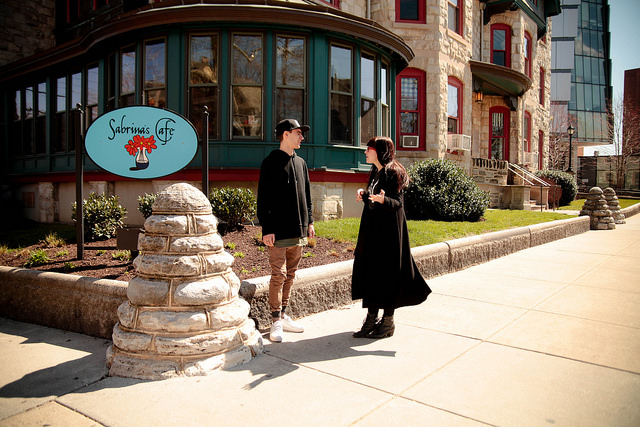 Jennifer Logue: Butch, thank you so much for taking the time to have lunch with us today! So what were you up to earlier? How’s your day been?
Oddkidout: Today has been great! I woke up on the later side because I was up till 3am last night working on some new music. I came over to the deliciousness of Sabrina’s with you guys now and am headed to meet up with Joe Nicolo afterwards! 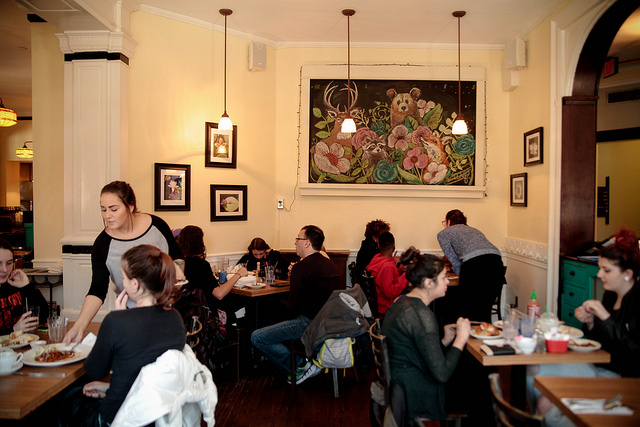 JL: Clearly, Monday can also be a “funday!” So what makes Sabrina’s Cafe your favorite restaurant?
OKO: When I first came to Drexel last year as a freshman, I had no idea where to go for a good meal. My friend who was a recent grad from Drexel recommended that I try Sabrina’s because it was close and super delicious. Since it was right around the corner from my dorm, I decided to go check it out. They served my beloved Chicken Salad and to this day it’s still one of my favorites! (And yes, I would consider myself a chicken connoisseur). 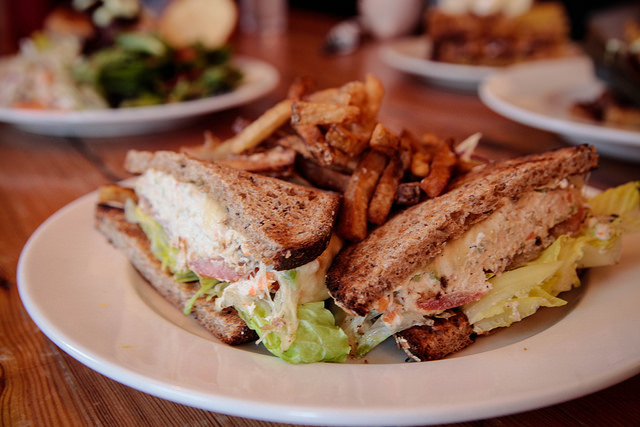 JL: Okay! I mean, you can’t go wrong with Sabrina’s. I’m jealous you live so close. (laughs) I was going to ask you about your favorite menu item but clearly, I think the Chicken Salad Sandwich is one of your top picks. I’m more of an Islander girl myself. But any other faves?
OKO: Yeah, the Chicken Salad is my favorite by far. But the Challah French Toast is also incredible. It’s just a huge plate of amazingness that I probably get once a week, usually on Sunday mornings. 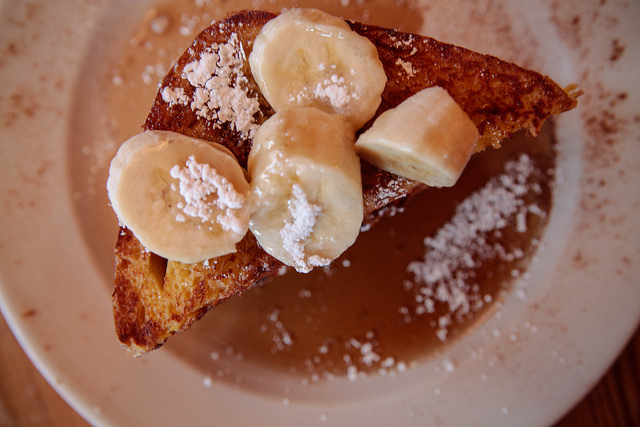 JL: (laughs) Fair enough! And I agree, that Challah definitely has swag. So what are you up to musically right now? Any new releases or shows coming up?
OKO: I just released my debut EP about a week and half ago and am nearing 500,000 downloads! So I’m working on finessing all of the business parts that go into releasing projects now. I have a few live shows coming up, one with BWC Garments that I’m really excited about. I’m also in the very beginning stages of creating a full length album. In time it will come. 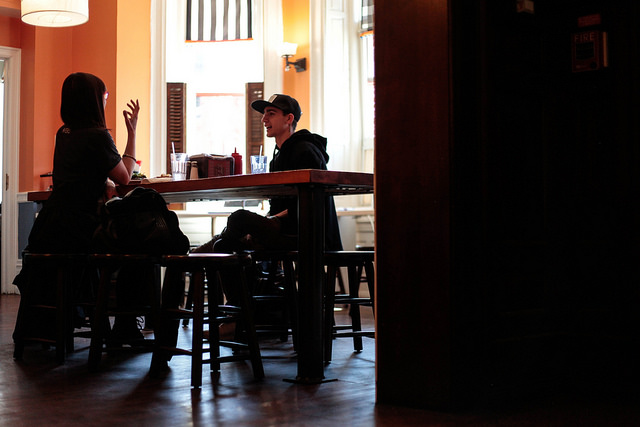 JL: And if you could produce any artist in the world, who would it be and why?
OKO: Hmmm, that is such a hard question. I would really love to work with Jhene Aiko. She’s got such an amazing voice and I think a lot of my beats would mesh really well with her style. She also just seems like a very down to earth, cool person.

JL: Now Social Media is such a big part of music these days. Do you love it or hate it?
OKO: Well, I love AND hate it. I love it when it’s used in the right way. It’s a great tool to get your art and business out to the world in ways that would never be possible without it. It’s also a great way to stay connected with friends who don’t live close and to keep up to date with what’s happening around the world. However, after reading a plethora of political debates and seeing every 20 year old girl use the dog-ear snapchat filter on Facebook, I definitely just put my phone down and turn it off.

JL: (laughs) I don’t even know what the dog-ear snapchat filter is! Getting old. Anyway! Now we’re going to play a game called Bands or Bites. You tell us which you’re a bigger fan of. If you can’t decide, you can say it’s even.
OKO: (laughs) Okay! 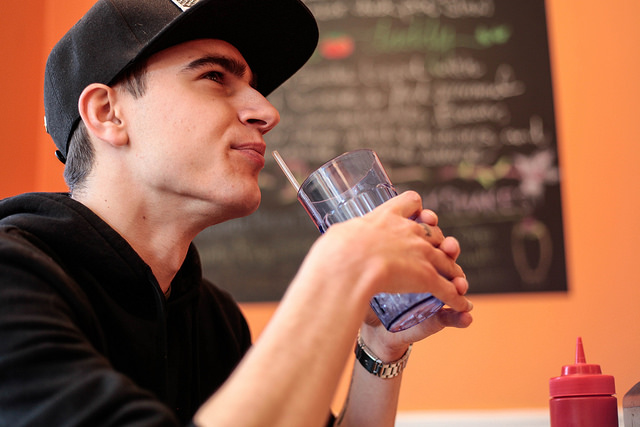 JL: Arianna Grande or a Grande Iced Caramel Macchiato?
OKO: Arianna Grande. I am like the only person I know who hates all coffee-based products. I like Arianna. I could do without either, honestly…was that too harsh?

JL: (laughs) No, just honest! Geez. I couldn’t live without coffee, though. Here’s a tough one for you: Frank Sinatra or Chicken Salad?
OKO: Oh man, how are you going to put Frank Sinatra and Chicken Salad up against each other? That one I cannot choose. They both hold way too much meaning in my heart. Yeah, if you couldn’t tell yet, I really love chicken.

JL: (laughs) I’m sure Frank does, too. Adele or Makers Mark?
OKO: Adele, one hundred percent. I actually don’t drink alcohol so that one is a no-brainer. But, I really do love Adele. I listen to her a lot, actually. “Melt My Heart to Stone” is one of my favorite songs. 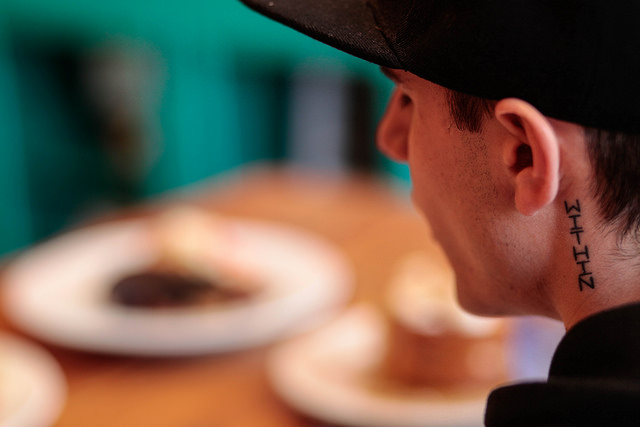 JL: That one was really tough. In a perfect world, we could have our Duke and eat our Chocolate Lava Cake, too. Ok. Last one! A Tribe Called Quest or Pasta Primavera?
OKO: Alright, I quit. How are you going to put my favorite food (Pasta) and one of my favorite Hip hop groups against each other?! That’s another tie. They both are way too important to me. (laughs)

For all the latest on Oddkidout, be sure to follow him on Instagram here. Also stay tuned to the #FACTInstaBeats series he co-created with Fact Mag.

Sabrina’s Cafe Powelton is located at 227 N. 34th Street in Philadelphia. You can check out even more photos below.