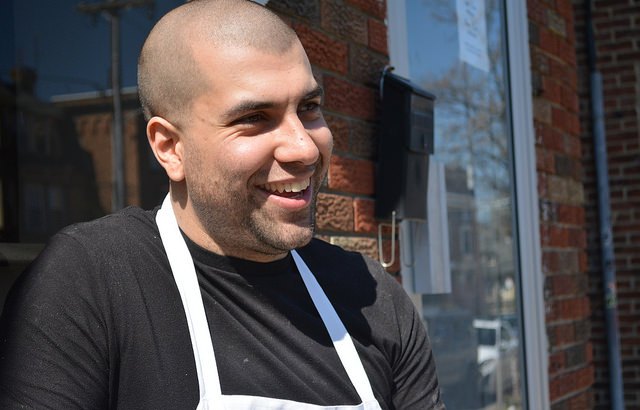 For this edition of The Interview, we’ve changed things up a bit when we found out that the co-founder of Dottie’s Donuts, Jeff Poleon, is also a touring musician! Given that he leads a life of both food AND music-making, we thought Jeff would offer a unique Bands & Bites perspective and let’s face it– we were really hungry for Dottie’s Donuts!

In case you didn’t know, their brick and mortar location opened up officially on March 18th in West Philly and it’s already a sensation. Vegans and non-vegans alike are going wild and we can honestly say that the Dottie’s Donuts taste even better than they look on Instagram. 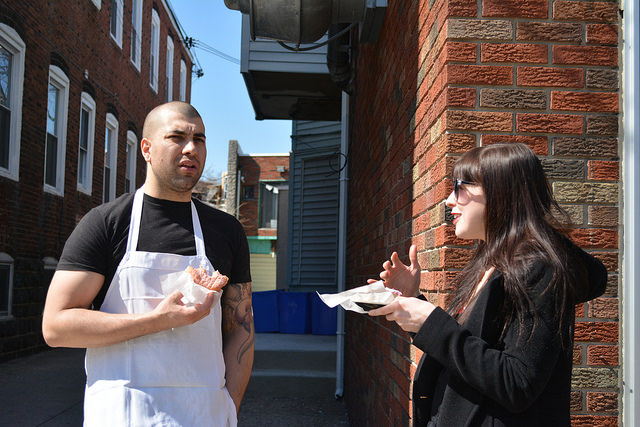 Jennifer Logue: So what’s a typical day like for you now that the store is open?
Jeff Poleon: Great so far! Our day to days have been 4am-4pm daily, sometimes later on the weekends. It’s a lot of work but my partner and employees all seem to be enjoying the daily routine of donut shop life.

JL: Getting that donut hustle on! Tell us about the day you decided to start Dottie’s Donuts. How did you decide on the name Dottie’s? How did the idea come about?
JP: My business partner Matt Quinn and I met working at Black Bird Pizza. Mark, the owner of Black Bird, brought it to our attention that the Philly Vegan scene was lacking an all-vegan donut shop. From there, Matt and myself ran with the idea with a lot of help from Mark. Dottie’s is named after Matt’s grandmother. 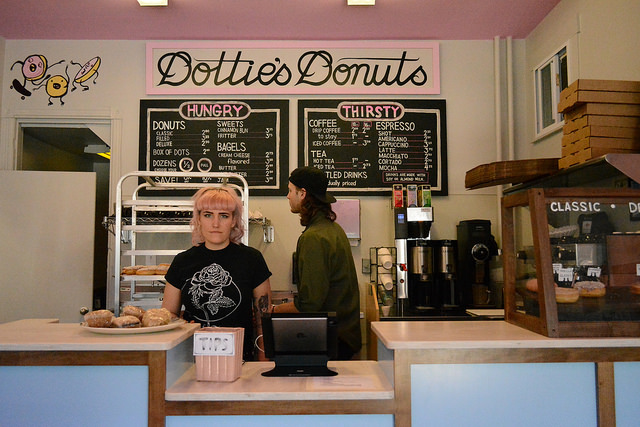 JL: This I must try! I’ll have to come back early next weekend before you sell out. Dang you guys are popular. (laughs) So what are you up to musically right now?
JP: I have a few bands I’m working on right now. Currently the only active band is called Latex. We just did a west coast tour and are in the process of writing and recording an LP. We have a few shows lined up in April and May, but for the most part we are just working on the new record.

JL: Who would you say your biggest musical influences are?
JP: Marky, Johnny, Dee Dee, Joey, and Tommy Ramone.

JL: Big Ramones fan, clearly. There should totally be a Ramones donut if there isn’t one already. (laughs) If you could go on tour with any band, who would it be and why?
JP: It would have to be Motorhead. Can’t really top any of their tour stories!

JL: And since Dottie’s Donuts are vegan, they’re healthier for you, right?!
JP: We use better ingredients than a generic donut shop, however it’s still a donut, fried in oil topped with sugar.

JL: But since the ingredients are more natural, I am totally going with they’re more healthy. (laughs) Now we’re going to play a game of Bands or Bites. You tell us which you’re a bigger fan of! Ok. Coffee or the Clash?
JP: Coffee. The Clash are great but I can’t live without coffee.

JL: Sonic Youth or an IPA?
JP: Same as the Clash or Coffee question. IPA over Sonic Youth.

JL: Screaming Females or a Blueberry Coconut Donut?
JP: This is a hard one. Members of Screaming Females were some of the first to ever try our donuts and they consistently put on one of the best live shows. However, donuts pay the bills so I think I have to go with donuts. 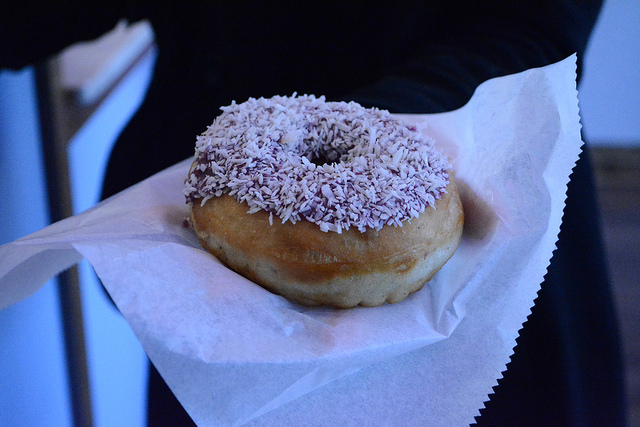 Jeff would like to give a big thanks to Black Bird Pizza, Elixr Coffee, and Four Worlds as well.

One thought on “The Interview: Jeff Poleon of Dottie’s Donuts leads a life of food and music”