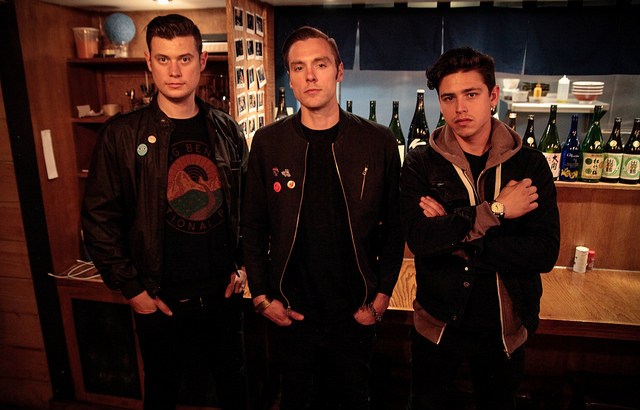 DREAMERS is a band from Brooklyn that mixes 70s punk with power pop. After their single “Wolves” was placed in full rotation on SiriusXM’s AltNation, the song climbed the fan-fueled charts, peaking at #7. Shortly after, DREAMERS signed with Fairfax Recordings and found themselves touring with their idols, Stone Temple Pilots.

Before their show at Milkboy a few weeks ago, Nick, Nelson and Jacob met with me for a quick bite at Hiro Ramen in Philadelphia. We talked about making their new album, peanut butter obsession, band dynamics, and more. 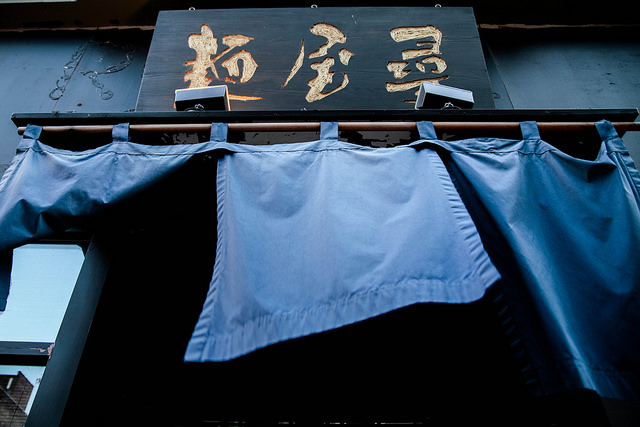 Jennifer Logue: So first of all guys, I gotta ask, what was it like touring with Stone Temple Pilots?
Nelson: It was amazing. Really, really amazing. The first CD I ever owned was the first Stone Temple Pilots record.
Nick: That was before Jacob joined the band but they were super supportive of us. Helped us out a ton. Chester of Linkin Park was singing for them at the time. He bought us hotels out of his own pocket. They were super helpful and amazing. We got to play in the huge theater in Seattle where I grew up. That was cool. 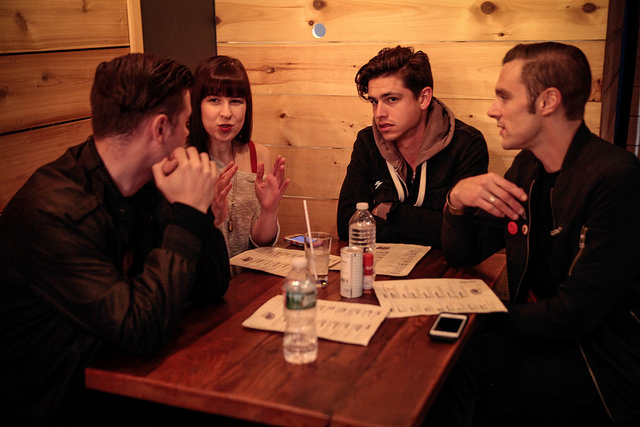 JL: It must have been so incredible to be on the road with a band you admire so much.
Nelson: They were just really generous, hanging out with us all the time in the greenroom. Robert DeLeo the bassist said, “pay it forward.” He showed us the path of being humble and sweet and still be successful.

JL: I feel like all the successful people I meet are humble and down to earth…
Nick: Not always! (band laughs) Well I don’t know. I don’t want to talk bad…(coughs) Prince! I heard that he’s a dictator.
Nelson: We were just talking about a story we read about Prince. He was on a European tour and apparently, one of the roadies didn’t take down his wires the way he liked and instead of firing him on the spot, he waited until they were going from one place to the next and was like, “I don’t want that guy going.”
Nick: Left him at a gas station.
Nelson: (laughs) I don’t know if this is true. He could be a really sweet guy and this could be all made up. Maybe it’s all an act.

JL: Well, we are talking about him now! Certainly keeps the conversation going if it is an act. (laughs) So back to Stone Temple Pilots. Did they give you any advice as a band?
Nick: Don’t break your foot. I busted both feet recently before that and it was just healing. And Chester, the singer, broke his foot on tour and had to deal with it.
Nelson: You couldn’t tell though when he performed though and they were doing long sets. He was still dancing around onstage but backstage he was limping.

JL: Shake it off right? Ouch. That is crazy. So let’s talk about the new album you’re doing in LA. Who are you working with?
Nick: The producer of our album, Kevin Augunas, is also the head of our label. He’s our one stop shop. He owns and runs Fairfax Recordings which is Sound City Studios. That’s where they recorded some of our favorite albums of all time, such as Nirvana’s Nevermind, Fleetwood Mac’s Rumours and Neil Young’s After the Goldrush. (pause) We’d seen the the Dave Grohl documentary about it.  Every studio has platinum records on the wall but this was like serious.

JL: It’s an analog studio, right? So you’re able to record on tape first and then run it through digital.
Nelson: Yeah. It’s pretty cool. Everything just sounds ridiculously good.

JL: It’s hard to find studios like that now.
Nick: It is. They almost went out of business actually until it was saved.

JL: So you guys signed with Fairfax after the success of “Wolves,” which I love by the way. What was the story behind that song?
Nick: I just got out of a relationship. The song was about my ex and I noticing we became like each other. In a relationship, you pick up on each other’s habits. My dad used to say, “If you lie down with dogs, you end up with fleas.” So just a mix of those two ideas.

JL: Very cool. So on that note, the video for your new song, “Drugs,” is a commentary on the social media- driven world we live in now. Do you think social media has had a bad effect on the creative process?
Jacob: It all depends on the habits you form with technology. If you get lost in a warp hole of feeds and stop being creative then it starts being a problem.
Nick: Too much of anything isn’t good. If you eat mac and cheese everyday…
Jacob: …it will make you sick
Nick: …it stops being bomb. (laughs)

JL: (to Nelson and Nick) So what foods do you guys love? This is ‘bands and bites’ after all. (laughs)
Nelson: I love Peanut butter. Addicted. And almond butter
Nick: He would give up any musical artist for peanut butter.
Nelson: Really it’s a love affair. It’s like a marriage, really. I will never get sick of peanut butter.
Nick: That’s not what marriage is like.
Nelson: It’s a good marriage!

JL: I guess you could say that being in a successful band is a lot like making an awesome smoothie. How do you guys stay balanced as a band?
Jacob: Communication. Being in a band is a lot like being married. We all have very similar goals in life. We all respect this opportunity. We all experienced things that brought us to a similar point in music. Being on the same page. I’ve been in so many bands. Sometimes it’s a few different people that have different goals. At the end of the day, it’s all apart of the growing pains of learning how to function in this industry.

DREAMERS is currently touring the US and will be performing Lollapalooza this year alongside another one of their favorite bands, Radiohead.

Hiro Ramen is located at 1102 Chestnut Street in Philadelphia. You can check out a full gallery of our experience below.