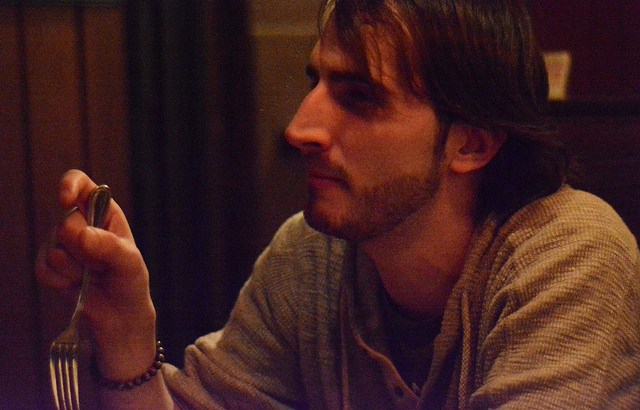 Chris Gennett is a promising singer/songwriter from Philly who mixes folk and blues seamlessly. I don’t remember how we met initially but I’m pretty sure it we were both performing the same show- most likely one of Boy Wonder’s Philly Rising nights at World Cafe Live. Since then, Chris has been steadily growing as an artist, having released his first official album, Hey Kid, as well as traveling to SXSW last year for shows. We met up at one of his favorite restaurants, P.O.P.E. in South Philly, to chat music, their Thai Chili Barbecue Sauce, whether he’d choose John Mayer over coffee, and more. 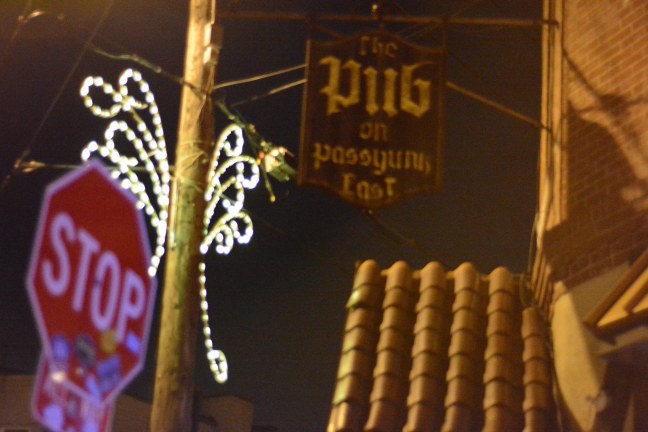 Jennifer Logue: So what were you up on this gorgeous day? Can’t beat 72 degrees in March…
Chris Gennett: It really is a beautiful day isn’t it? I’m just here in the city walking around. I came from work. I’ve been cooking at a Bar in Swarthmore called The Stretch for a little while. You can catch me playing my acoustic stuff there every Saturday.

JL: Very cool! So what made you decide to pick P.O.P.E. for our meeting place today?
CG: I love P.O.P.E. most because of their atmosphere. Atmosphere has always been something very important to me, in restaurants and in life. Then there’s the huge beer list and the amazing food. I’ve never once had a bad experience here. It’s also a great place for vegans. I’m not a vegan but it’s still nice that they have so many options for them. 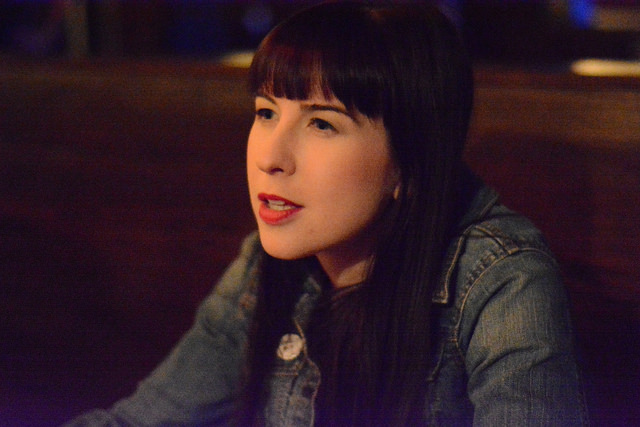 JL: It’s always good to have options. Tell us about how you first discovered P.O.P.E.
CG: My girlfriend brought me one day. She used to live down the street and we would come here a lot. When we didn’t come here we’d order food to go. 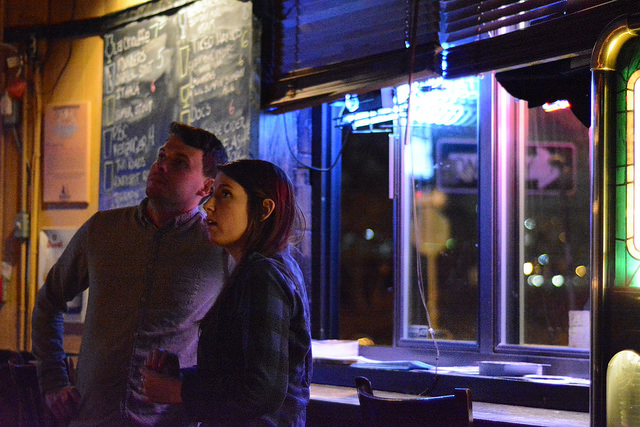 JL: What are some of your favorite dishes?
CG: I’ve always ordered either the Chicken Sandwich or the Pierogies. They have good fries but their sauces are what I really love. The Thai Chili Barbecue Sauce is so damn good. I would eat it with a spoon.

JL: Wow. That must be some amazing sauce, then. This I must try. So if the Thai Chili Barbecue Sauce were a song, which song would it be and why?
CG: (pauses) I’d have to say Magnolia by J.J. Cale. It’s smooth and beautiful. He’s incredible. He wrote “After Midnight,” “Cocaine,” and “Call Me The Breeze,” too.

JL: I actually hadn’t heard of him before. Going to look him up later… Music recommendations, food recommendations, I’m in heaven! What did you end up ordering again?
CG: The Pierogies. You?

JL: Oh, I got the Veggie POPE Burger. It’s made of kasha not quinoa which is different. Curious about it. Anyways, while we’re waiting, you want to play a game of Bands OR Bites?
CG: (laughs) Ok! What is it?

JL: Basically I give you a Band and a food item and you tell me which you’re a bigger fan of.
CG: Oh cool. (laughs) Let’s do this. 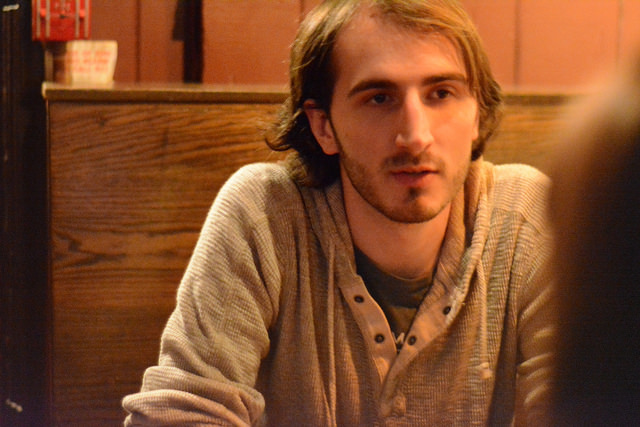 JL: The Districts or Pierogies?
CG: I do like Pierogies. But there are plenty of other ways I can eat potatoes. The Districts are fantastic. I actually discovered them at SXSW in Austin my first year and I had no idea they were from Philly. It’s really nice to see their success.

JL: That was my first time seeing them too! Great times. But Kanye West or Gelato?
CG: I like old Kanye. You can certainly find me bumping some College Dropout but he just pisses me off lately. So Gelato. 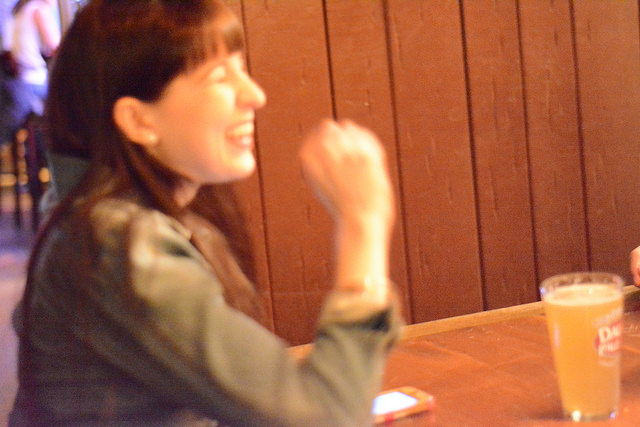 JL: Gelato for the win! (laughs) John Mayer or Coffee?
CG: Easiest question you’ve asked me. I’m one of the few people that can’t drink coffee, I’ve just never been able to stand it. Coffee and pickles. Ugh. John Mayer is probably my biggest influence so I’m going with him.

JL: As a coffee addict and John Mayer lover, that would have been the toughest question for me to answer. Lucky you! Apparently coffee is bad for your adrenals but I gotta get my kicks somewhere. (laughs) Muse or Pizza?
CG: Pizza. Muse is good….but not pizza good.

JL: Not many things are. Taylor Swift or Braised Brussel Sprouts?
CG: Why? They’re both so bad! If I had to choose…I would say…Ray Charles. (laughs) Sorry, I can’t pick either.

JL: Braised Brussel Sprouts are quite delicious in my book and I am quite open in my love for Tay Tay’s infectious pop songs. But that’s just me! To each his (and her) own!
CG: (laughs) Fair enough!

JL: Anyway, that’s all I’ve got for that game. So what do you think is a misconception people have about Philly food and music?
CG: That we’re all Cheeseteaks and Tastycakes. Philly’s growing and has so many gems. In terms of music, I don’t think people really know about the music scene. A lot of people I bring to shows always say the same things: “I didn’t know this place was here!” or “I didn’t know there was live music here!” or something similar. They are starting to become more aware of it though. That’s why I think Rock On Philly is so important. 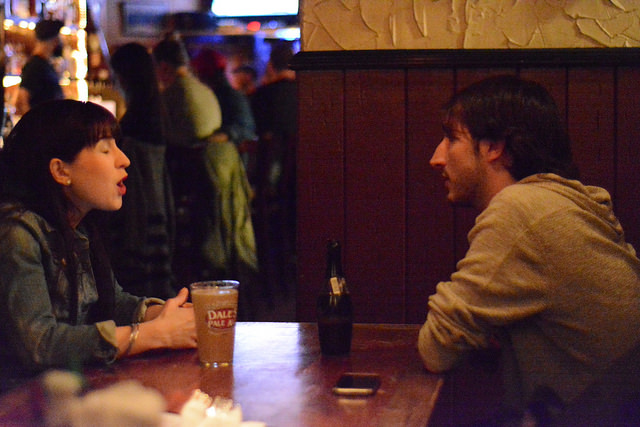 JL: You don’t say? (laughs) So on the topic of live music, you playing anywhere soon?
CG: I’m playing the TLA on 3/31! I’m so excited about it. It’s my biggest show yet. I’m playing along with Emily Mineo and her brand new band! It’s Boy Wonder’s Album Release Show. He’s been my mentor for the entirety of my music career. I owe him a lot and I cannot wait to hear his record. I haven’t asked him for a sneak peek because I want to be surprised like everyone else.

JL: Boy Wonder has done amazing things for the local scene. I’ll have to have him on Bands & Bites soon!  You have any new music coming out yourself?
CG: I’m releasing a single called “Right About You.” It’ll be out by the time this interview is up. It’s next level for me. There’s kind of a Death Cab vibe to it, which is nice because it happened by accident. It’s always nice when influence sneak their way in. But yeah, check it out on my site, iTunes, Spotify and all that.

For all the latest on Chris Gennett, visit www.chrisgennett.com. If you want to buy tickets to the upcoming TLA show, click here.